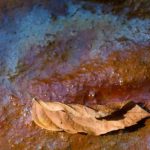 In 2017, a curious red color appeared on the lakebed in Pickerel Cove near the Young’s Brook inlet, so we asked the experts at the NH Lay Lakes Monitoring Program (LLMP) to help us understand what’s causing this phenomenon.

The Young’s Brook location was sampled that year, and no unusual coloration was observed.  What appeared later was most likely iron bacteria on the lake bottom.  NH Department of Environmental Services has a Fact Sheet that discusses iron bacteria, and this Iron Bacteria Fact Sheet offers a couple of images.

During wet years, or periods when the water table is higher than normal, NH LLMP has sometimes seen increases in the incidence of iron bacteria in stream inlets and around the periphery of lakes.  The iron is in the soils naturally, but when the water levels are elevated, there is more exposure to iron containing materials that can leach into the lakes and streams.